UMe celebrates 50th anniversary of the classic debut LP with vinyl reissue including a limited-edition colored-vinyl special edition, out on June 30

“I wanted to cross-pollinate rock with the avant-garde, and then I met Lou Reed and that was the solution… It was the rest against us. And we had a point to make: ‘We weren’t there to f**k around.’” – John Cale

LOS ANGELES, CA – June 14, 2017 – Half a century after the 1967 release of their landmark debut album The Velvet Underground and Nico, the Velvet Underground’s intrepid musical vision and audacious lyrical approach have yet to be equaled.  Although they met with little commercial acceptance during their existence, the seminal New York foursome of Lou Reed, John Cale, Sterling Morrison and Maureen Tucker has since attained legendary status, and the band’s body of work stands as a monument to rock ‘n’ roll’s capacity for sonic experimentation and artistic fearlessness.

To celebrate the 50th anniversary of the band’s game-changing debut LP The Velvet Underground and Nico, on June 30, 2017, UME is releasing a special vinyl edition of the album that preserves its iconic original Andy Warhol-designed cover art.  The anniversary edition will be available as standard black-vinyl and available at retail and online outlets.  A limited edition pink-vinyl version with a pressing of only 1000 copies will be available exclusively through uDiscover.

In addition to reproducing Warhol’s beloved original “banana cover” design, complete with peelable banana sticker, the 50th-anniversary vinyl edition also reproduces the album’s original gatefold cover as well as its rare original back-cover “torso” photo, with Lou Reed’s face superimposed over the torso of Warhol associate Eric Emerson.  The photo appeared in this form on The Velvet Underground and Nico‘s initial pressing, but was quickly altered for later editions when Emerson threatened legal action.  The shot is restored to its original glory on the 50th anniversary edition, along with a replica of the black sticker that was once used to obscure the disputed image.  The sticker will be attached to the shrink wrap of the anniversary LP, allowing listeners to experience the album’s full original package.  An additional insert has been added for this edition, with vintage images plus new liner notes by Velvets co-founder John Cale and Richie Unterberger, author of the book White Light/White Heat: The Velvet Underground Day-By-Day.

On November 16-18, John Cale will celebrate the Velvets’ 50th anniversary by curating three nights of special performances as part of the 2017 Next Wave Festival at New York’s BAM.  For the first two nights, Cale will be accompanied by an orchestra and special guests to perform The Velvet Underground and Nico in its entirety.  On the third evening, Cale, backed by an orchestra ensemble and choir, will perform selections spanning his long, wide-ranging career, including his work with the Velvet Underground.

Today, the Velvet Underground’s immense influence is universally acknowledged.  But for most of the band’s actual existence, they barely registered on mainstream radar.  The Velvets’ raw, uncompromising musical vision was reflected in the visionary interplay between Reed and Morrison’s wrenching yet nuanced guitar work, Cale’s squalling viola runs and drummer Tucker’s driving, primal beats.  Main songwriter Reed’s transgressive portrayals of drugs, sex and violence had no precedent in popular music, balancing unflinching grit with unmistakable compassion and empathy.

Early in their career, the Velvet Underground gained a well-connected patron in pop-art icon Andy Warhol, who used his influence to help the band win a recording deal with MGM’s Verve imprint.  It was Warhol who suggested that the musicians add icily glamorous German chanteuse Nico (nee Christa Päffgen) to their lineup.

With Warhol credited as producer, The Velvet Underground and Nico is one of the most auspicious debut albums in rock history.  With such essential numbers as “Heroin,” “I’m Waiting for the Man,” “Sunday Morning,” “Venus in Furs,” “The Black Angel’s Death Song,” “Femme Fatale,” “All Tomorrow’s Parties” and “I’ll Be You Mirror” (the latter three featuring Nico’s haunting lead vocals), the album chronicles a seamy urban milieu that had never before been documented in popular music, while also exploring a gentler baroque pop sensibility that provides a complementary contrast to the album’s harsher insights.

As Cale writes in his liner notes “We focused on trying to inject psychological techniques of hypnosis, drone and repetition into music about topics that we thought were incendiary but within a literary tradition.”

In its original release, The Velvet Underground and Nico rose no further than  No. 171 on Billboard‘s album chart.  Yet the album has emerged as a one-of-a-kind classic, occupying the No. 13 spot on Rolling Stone‘s list of the top 500 albums of all time, and is included the Library of Congress’ prestigious Recording Registry, established “to maintain and preserve sound recordings and collections of sound recordings that are culturally, historically or aesthetically significant.”

Watch the “Sunday Morning” animated video of the 50th anniversary of the
album here: http://smarturl.it/TVUSMvideo

For more information on The Velvet Underground visit: 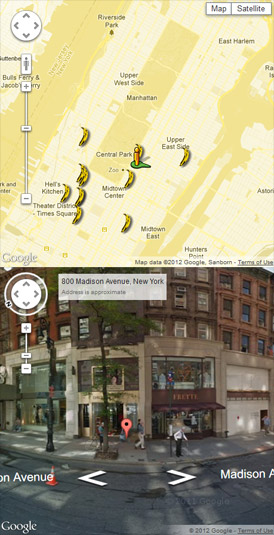